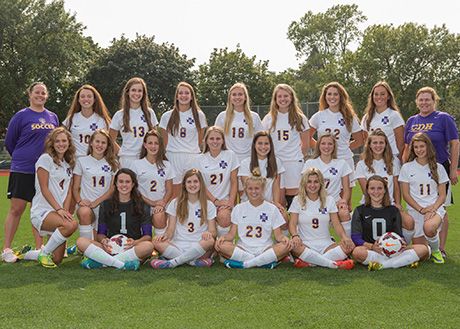 Cretin-Derham Hall is excited to announce Rosie Malone-Povolny as Girls Soccer Head Varsity Coach. Rosie was a four-year letter winner at Cretin-Derhman Hall, where she earned all-conference honors each season and was an all-state selection in 2006.

After graduating as a stand out soccer player and two year captain at CDH, Rosie attended Division 1 Marquette University. She was a 4-year starter on the Women's Soccer team, playing 86 out of 89 possible career matches between 2007-2011. Rosie holds the record for the most minutes played of any midfielder in Marquette's Women's Soccer program history. At Marquette, Rosie collected a long list of impressive recognition, including 2010 NSCAA Scholar All-American Third Team, 3 years on the Big East All-Academic Team, and 2 years included on the Big East Conference Third Team.

Professionally, Rosie has played overseas the past 5 years in Iceland, Sweden, and most recently with Medkila  Soccer Team in Norway from 2013-2015, where her career highlights include Top Scorer and Player of the Year.

Rosie has also been active as a coach in the soccer community while overseas. At her soccer club in Norway, she served as Head Coach of the 16U team and Assistant Coach of the Women's Amateur Team, which serves as a developmental team for the professional program. In her role as Director of the Soccer School, she coordinated and coached clinics and camps for boys and girls of various ages, up to young adults.

While back in the United States, Rosie has maintained her strong connection to CDH. She is no stranger to hard work and she is often found in the Fitness Center training. Fortunately, for CDH, Rosie will forego playing professionally next year to continue her coaching career at CDH.

Rosie brings a strong soccer experience background. She is passionate soccer development, training, strategy and teamwork, and will be a great leader as Head Coach of the Raider Girls Soccer Team.

At the meeting today, Rosie covered several items regarding excellence, team and passion for the sport.  Below you will find the summer soccer program information and a player information form that should be filled out for each student-athlete playing soccer next year. Please turn the soccer form into the Athletic Office.

If you have any questions or need to contact Rosie. Her email address is rmalonepovolny@c-dh.org or phone number 651-497-6442.

CDH Girls Soccer consists of five teams: Varsity, Junior Varsity, B Squad, and two Ninth Grade teams. The varsity season and tryouts begin Monday, August 15th, 2016 and is 12 weeks in length playing 2 to 3 games per week. The tryouts are open to anyone 9-12 that wishes to tryout for Varsity.  JV, B and 9th grade season and tryouts begin August 17th, 2016 and is 10 weeks in length with 2-3 games per week. Practices are held after school anytime between 2:45-8:30pm.  There are games and practices on Saturdays. Ideally, there are 18-22 players on a soccer team. When numbers exceed this for any team, cuts may be made for lower level teams.