The classes of 1959 and 1969 were also honored. We are grateful for their continued support of CDH.

Casey O'Brien '17, cancer survivor and University of Minnesota football player, was the keynote speaker. The transcript of his speech is reprinted below: 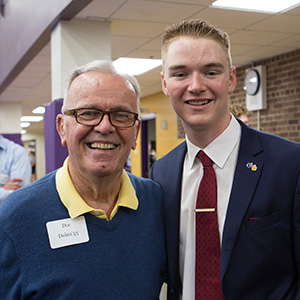 I have many memories of growing up around Cretin-Derham Hall and looking up to all those who played here. I wore my Joe Mauer T-Shirt everywhere I went, and made sure that everyone knew that he went to CDH. I was a ballboy for the football team every Friday night, and got to watch my Grandpa and Uncle Mike coach. I never missed a hockey game because I wanted to stand by the locker room and high five the players on the way out to the ice.

As you can tell, from a young age, sports were a very big part of my life. I was not, and still am not much of a reader, so being outside and playing sports was my thing. I would play any game where there was a winner. It didn’t matter if it was hopscotch, kickball, or hockey, I was playing, and I wanted to win. I was not, and still am not, a very good loser. But most of all, I loved to play football. I knew I was a Quarterback from the first time I picked up a football. I loved to be the person everyone was looking at in the huddle, and I wanted the ball in my hands at the end of the game. When I was younger, my goal was not to play in college or the NFL, it was to play Quarterback at CDH.

I began high school here in the fall of 2013 and became the starting quarterback for the freshman A team. I was well on my way to my goal of playing varsity football when my life changed forever. I was about halfway through my freshman season when my left knee started to hurt. We went to every doctor we could find, but no one could figure out what was wrong. It had gotten to the point where I was walking around on crutches to keep weight off it during the school day just so that I could practice. This was when we knew we needed to get an answer.

On December 14, 2013 we went in to get an MRI. It was on that day that he found something the other doctors could not. By noon on that Saturday, just over a week before Christmas, I was diagnosed with Osteosarcoma, an extremely rare form of bone cancer. I was just 13 years old. I had no idea what this meant, but I knew it wasn’t good. My first question was “When can I skate again? I'm missing hockey season.”  The doctor looked at me and said, “Right now we are just trying to save your leg.”

I will never forget the outpouring of support from my fellow classmates at Cretin-Derham Hall. I was sitting in my hospital room just two days before Christmas going through my first round of Chemotherapy when I got a text from one of the seniors at school. “Check your email,” he said. I immediately went to my email and saw a video of all 1,200 students singing “We Wish you a Merry Christmas” to me. I am not a crier, but I remember sobbing after seeing how much the other students (many of whom did not know me) cared about me. It was optional to attend, but every single student showed up. That is one reason why this school is so special.

The doctors had asked me what my plan was moving forward with school, seeing as though I was going to be in the hospital for six days at a time to receive chemo. “Most kids will take a year off and come back when they are ready,” they told me. “So I just quit school and my friends go on without me?” I wanted no part in that. With the help of my advisor Mike Brewer, the amazing Doctor Janet Watson, and too many other teachers and staff to count, I was able to facetime into every class while sitting in the hospital. I even worked my way onto the Honor Roll. Facetiming into class kept me busy during the long days and helped me feel like I was still a part of the community when I was not there. My favorite part of the day would be when a teacher would leave the room and one of my buddies would jump into the camera and make me laugh. It always seemed to come at the right time. When I was out of the hospital I was supposed to lay in bed to rest and recover. I chose to go to school and attend class for the full school day. I was just a freshman but felt like I was a celebrity because everyone wanted to talk to me and see me. There were always arguments on who got to push me in my wheelchair to the next class. I got to decide, and the senior girls always won.

I battled back and forth with cancer multiple times in my high school career. There were many highs and many lows throughout all this, but there were two things that CDH gave me that stayed consistent.

First was my faith. Coming into school here, I went to church on Sunday, but that was only because my parents made me. After being diagnosed with cancer, Father Forliti was one of the first people to call me. From there, we created a friendship that I will take with me the rest of my life. I have had 17 surgeries in the last 5 years, and he has been there before every single one to bless me. He has taught me to lean on God in the good times and the bad, and more importantly to trust in the plan God has given me. Classwork and mass at CDH allowed me to expand on this part of my life, and my faith has now become something that is extremely important to me. I am now in college and I do not miss a Sunday. I think God has chosen me to be his Cancer Warrior.

The next thing CDH has given me is friendships. I was lucky enough to meet a group of buddies that mean the absolute world to me. This same group of boys were sitting next to my bed as I went through my first round of chemotherapy, shaved their heads when I lost my hair, brought my books down to the hospital and helped with homework when I was FaceTiming into class, gave up their Friday night’s to come over and play video games when I was sick, had my back when my cancer relapsed, believed in me when I said I was going to play football for CDH while fighting cancer, about got thrown out of the stadium when I made my first career start (won’t forget that one), and most of all, have never treated me like I had cancer. It has never been brought up once. It should come as no surprise that there is a full table of these boys who all came back from school to watch me speak tonight. Can’t wait until the wedding parties start fellas.

All in all, I would not trade my four years at Cretin-Derham Hall for anything. As I look back, now almost a year-and-a-half cancer-free and lucky enough to play college football, I am extremely proud of where I went to high school. There are so many amazing people who took care of me, and continue to be a part of my story. It is hard for me not to smile when I think back at all the memories I have here. The faith and the friendships that I developed during my time at CDH are two of the most important pieces of my life. This school and this community will always hold a very special place in my heart.

News from our distinguished alumni.

A Peek at Our History

Derham Hall and Cretin collaborated in the spring of '86.

Two Raiders Headed to the NFL

Jashon Cornell '15 and Jake Lacina '15 were both signed this weekend.