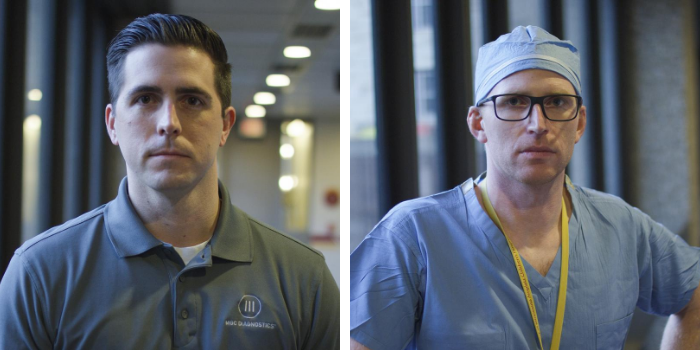 The flurry of headlines this spring focused on their potentially life-saving invention, but that was just one chapter in the lifelong friendship of Jim McGurran ’04 and Stephen Richardson ’04.

The two men got to know each other as kids at St. Rose of Lima. They played sports together and even attended a medical science summer camp in grade school. After graduation, even as they remained close friends, taking long road trips to ski in Wyoming and even serving as godfathers to each other’s children, their professional paths diverged.

Along the way, they developed skill sets that would one day complement each other perfectly. It was on their most recent ski trip, in January, that the topic of COVID-19 first came up. The news coming out of China didn’t look good, and their medical backgrounds made them keenly aware of the potential consequences, such as the shortage of masks and ventilators.

A Simpler Ventilator Was Needed

When the virus hit the United States a few months later, Richardson had an idea — you could create a rough substitute for a ventilator out of basic materials, potentially saving thousands of lives. Essentially, he envisioned using a lever to repeatedly squeeze a bag filled with air. The idea struck him on Saturday, March 14.

“The problem with ventilators is that they are extremely complex, and they have hundreds if not thousands of parts. So you’re not able to produce them fast. I knew there was a possibility we would have to go the direction Italy had and ration ventilators, and this was a way to combat that,” he said.

The next morning, he was about to get on his exercise bike when he decided there was no time to waste. He called up his old pal, McGurran.

“I wasn’t surprised to hear from him,” McGurran said. “We had never worked together, but our spheres of knowledge overlapped a bit. At first it was just an idea, but Steve had a real sense of urgency that pushed this project along from the beginning.”

Seven hours later, they had a prototype built and validated. From there, the race was on.

“Many of my colleagues were getting to spend time at home, and I was busier than I’ve ever been. For four weeks, when I wasn’t sleeping, I was working on this,” Richardson said.

“Our ability to develop this project was really leveraged on relationships,” McGurran said. “Steve and I have a really good rapport and were able to work well together, and we had a wide network across the Cities. I was amazed by the energy companies responded with — we were talking to executives and CEOs right away. However, it wasn’t always easy. When you’re working with this many people, and trying to move this fast, you’re going to go around standard approval systems and people are going to get upset. We just kept distilling the problem: we’re making a bag smasher. And then finding the simplest way to do that.”

A Sense of Responsibility to Community

Both men credit their time at CDH with helping them develop a sense of responsibility to their community.

“My philosophy and theology classes really made me who I am,” Richardson said. “Throughout this process, I just kept coming back to, ‘what’s the right thing to do?’ There might not be a system in place, it might be challenging, it might hurt the system’s feelings, but what’s the right thing to do? You have to pursue that relentlessly. CDH taught me that not only can I impact the world, but that I have a responsibility to. Jim and I both felt like if we could do this, we should do this. We needed to do this. This is not something I ever planned on doing, but once we saw a path, we needed to make it happen.”

There’s a good chance their devices won’t end up being needed in the U.S., but that doesn’t mean they won’t save lives. They’ll be distributed overseas, where they can be used in communities that lack ventilators, or in emergency response situations. Plus, they’ve released the design online, open source, so anyone can create their own.

“We hope these won’t be needed, but if they are, I’m glad they exist and I’m glad I got to be part of it,” McGurran said. “This is not a fun time, but this was a really fun and fulfilling project, and it was an honor to work on it with a great friend.”

News from our distinguished alumni.

A Peek at Our History

Derham Hall and Cretin collaborated in the spring of '86.