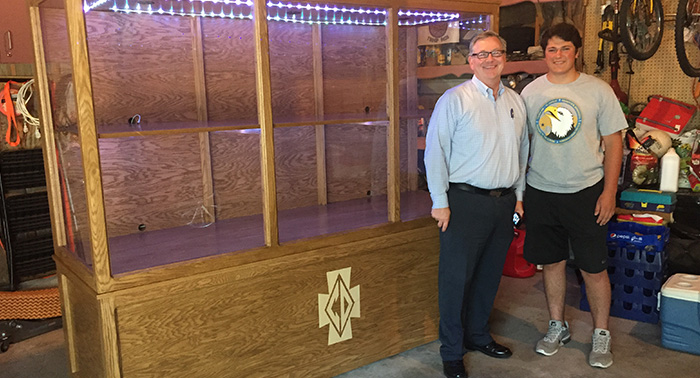 There are five traits of an Eagle Scout: To live with Honor, Loyalty, Courage, Cheerfulness, and Service.

Noah Peirson ’19 has successfully embodied these traits throughout his scouting career with Troop 9626 in Shoreview, MN. He emphasized the service obligation as part of achieving his Eagle Scout rank – to complete a “good turn” for Cretin-Derham Hall.

His project was to lead a team of scouts, family, friends, and classmates to design, cut, assemble, and finish an oak curio display cabinet for CDH.  The cabinet will display a Fontanini Nativity Crèche, a donation by his family to Cretin-Derham Hall.

Noah’s mom, Lisa Peirson, has collected set pieces over the past 30 years; it has been a Christmas favorite for Noah, Melissa ’15, and Jack ’12 to have on display at their home. As a family, they wanted to contribute a piece of their family tradition to their high school, also rich in tradition.

Noah was excited, and challenged, for the opportunity to produce a curio as his Eagle Scout project.

"My goal was to create a lasting, memorable, mobile, and usable cabinet for CDH that students and faculty would be proud to display and cherish for years to come," he said. Noah worked with CDH President, Mr. Frank Miley, in designing and creating the curio for the school.

He began his project by receiving donations of wood from Forest Products in Maplewood, casters from Rockler Woodworking in Maplewood, and other supplies as needed from family. He worked closely with a former scout leader, Tom Glander, who had all of the power equipment and expertise to produce the hand-crafted display case.

Noah assembled his team and they learned how to operate planers, table saws, miter saws, routers, pocket screw assemblies, sanders, drills/impact drivers, nail guns, and drill presses. They learned to work with plexiglass, stain, and varnish. They also learned to follow the most important rule in carpentry: Measure twice, cut once!

Noah’s project took a total of 447 hours of volunteer work to complete this past summer. He was granted the distinction of Eagle Scout on Tuesday, September 25, 2018. Noah is the second Eagle Scout in his family as his brother, Jack, also achieved this distinguished honor.

The curio currently resides in Cretin-Derham Hall near the Commons and receives admiring comments from all who see it. The curio will be in full use with the gifted Fontanini Nativity Crèche on display at the beginning of Advent season.

Grandparents Mass is back! We were so glad to welcome familiar faces and new friends for this special event.

The Lenten Season at Cretin-Derham Hall

Ash Wednesday marks the beginning of Lent. Each year, Christians are reminded of our temporal human existence, and come together to hold up the blessed gift of Life Eternal given to us by our God's love and grace through the person of Jesus Christ.

Brother Paul Joslin, who served in Guatemala alongside Blessed Brother James Miller, shared his memories of their work and Blessed James' death.