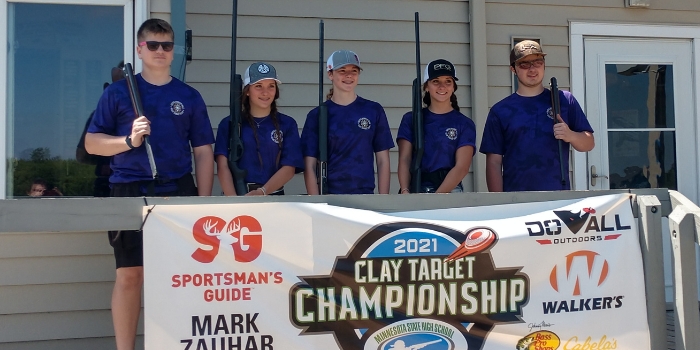 The CDH Clay Target had great seasons in both trap and skeet shooting. In trap, shooters aim at targets that are launched moving away from them. In skeet, the targets move side to side.

There are separate competitions for both sports.

In sections, Riley Bray '22 finished first, Kali Bray '22 second, and Emila Bray '24 third in Section 1A Conference. CDH sent five shooters to the MN State Skeet Championship in Prior Lake on June 23, in which 30 teams participated over a two day period. Emelia finished 2nd and Riley finished 3rd in the Novice Division for females.

Other CDH students who participated in the state championship were Connor Howe '22 and Joseph Whebbe '22.

Kali and Riley were both medal winners for the regular season for Trap Shooting Section 1A Females. Kali finished 3rd Place in the JV Division and Riley finished 2nd in the Varsity Division.
CDH sent eight shooters to the MN State Trap Championship in Alexandria in which 6500 students participated over an 8 day period. Over 700+ students competed every day. Emilia finished 3rd in the Novice Division for females.
Other CDH students who participated in the state championship are Howe, Whebbe, William Archbold '23, Cameron Kawalec '24, and Jack Haffely '23.
Congratulations, Raiders!
Tags: State Tournament, State Championship, clay target

CDH has partnered with Training Haus to provide improved performance training to our athletes.

Restrictions have loosened for both athletes and spectators.

The latest news from Athletics, Band, Counseling, and JROTC.