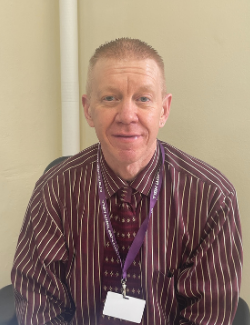 If the students at CDH were asked which teacher always has a bustling full classroom, most would answer “Mr. Rudi.”

Although Jeff Rudi is an astonishingly patient math teacher who loves working with students, he wasn’t always on the teaching path. At the beginning of college, he planned to major in piano performance. Unfortunately, after being accepted into University of Wisconsin Eau Claire, he realized that he “wasn’t as good compared to the many other talented people in the field.”

Contributing to this realization, Rudi lost his finger due to a tragic farming accident. While setting logs on a large tray at the farm, a two-foot-long blade powered by a hydraulic press sliced off his finger. After undergoing multiple surgeries on his finger, the doctor finally asked him if he wanted to try and keep the finger or not. Turning the question back to the doctor, Rudi asked the doctor what the most logical decision would be. Due to the cold weather conditions, the doctor gave his professional opinion that the finger would serve as a burden if reattached. The difficult decision was made, the finger would not be reattached. Rudi continued playing piano, but he ultimately switched to a more feasible major, math. It might seem like an unusual switch, but it made perfect sense to Rudi.

“There is a lot of music in math and a lot of math in music,” he said. In music, there is rhythm, movements, the time signature, and lots of counting. More specifically, the vibrations of piano strings vibrate at a certain frequency which you can calculate with math.

Rudi came to CDH in the fall of 2001 and has since been a huge asset to both the math and music programs. He used to be an accompanist for the CDH traveling choir, and helped the theater department with rehearsals. Now primarily focusing on math, Rudi teaches a plethora of classes, particularly enjoying the upper-level courses.

“It is fun teaching AP Calculus AB and BC students since they are very self-motivated,” he said.

As a person who has been teaching math for many years, Rudi realized that many students quickly get discouraged and frustrated while doing math problems. He has a mission to help students truly develop a love for and understanding of math. He welcomes everyone with open arms into his classroom to receive one on one help. With his patience and calm demeanor, Rudi will do the same math problem repetitively, each time with the same amount of explanation and detail, as new students enter his room and ask questions.

“Mr. Rudi is always willing to sit down and explain something until you get it - no matter how long it takes,” said Andy Chestovich '22.

“When I was asked to pick a teacher for teacher appreciation day, my mind immediately went to Mr. Rudi,” said Anna Caruso ’22, who is currently taking his AP Calculus AB course. “Not only does he patiently help me for hours each week as I have trouble understanding certain math concepts, but he genuinely enjoys teaching me and watching me succeed.”

Rudi says he strives to create a classroom environment that all students can thrive in, with both structure and the freedom to ask questions. With the belief that “group work is vital for a student's learning,” he also tries to implement group worksheets in which students can assist one another in solving challenging math problems.

“There is nothing that lightens my day more than to help students with math,” he said.

Rudi no doubt is an amazing math teacher, but he truly is a jack of all trades. His hobbies include hiking, playing piano, spending time with his five grandkids, and tending to a vegetable garden the size of his classroom. Rudi grows green beans, peas, onions, carrots, cucumbers, tomatoes, raspberries, strawberries, cantaloupe, watermelon, pumpkins, squash, and more. To Rudi, gardening is “very therapeutic” and he loves just getting his hands out into the soil and watching stuff grow.

Finally, Rudi says that his life goal is to visit all the national parks in the United States. Although he has only been to three national parks so far, he is determined to continue traveling in order to hit this goal.

“My mouth hit the ground the first time I saw the Grand Canyon because it was mind-blowing how magnificent the canyon was," he said. “It is the awesome power of God, and what He has created, so why not take advantage to see what is out there and to enjoy it.”

Julianne Mason '22 is a Communications Apprentice. She holds leadership positions on both the Dance Team and the Track Team. In addition to sports, Julianne also is part of the ambassadors club, student council volunteer core, National Honors Society, and also has a marketing internship with Amerigo. She is excited to help write and share intriguing stories for the CDH community.

Schafer will help teachers and students get the most out of the Ryan STEM Center.

22 students qualified for the State competition, which will be held this weekend.

Many Raiders earned a place on the Honor Roll for Trimester 2!