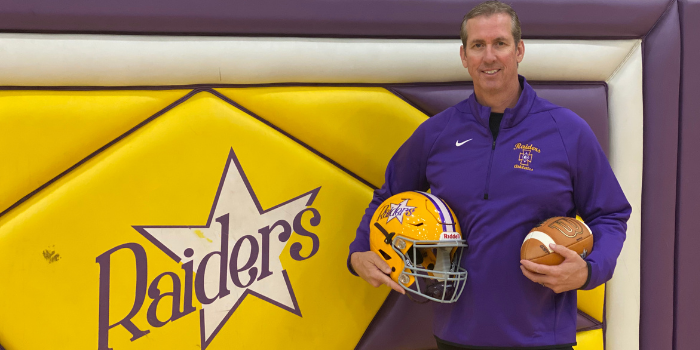 Walsh spent the last five years coaching quarterbacks in the Canadian Football League (CFL), most recently with the Ottawa Redblacks. He is widely regarded for his development of football programs. He and his wife Deanna and their son Brayden will be moving to the Twin Cities later this spring.

Walsh is excited to come back "home" to coach his fellow Raiders.

“I am excited for the opportunity to return to my alma mater - a place where I attended as a student and developed both academically and athletically,” said Walsh. “Now I have this great opportunity to serve the school that meant so much to me and was a significant influence on me as a young man. I can’t wait to teach this game I love and to develop student-athletes both on and off the field at Cretin-Derham Hall.”

“We are thrilled to welcome Steve Walsh back to Cretin-Derham Hall as Head Football Coach,” said Phil Archer ‘99, Athletic Director. “His experience and leadership in high school, collegiate, and professional football - both as a standout player and an effective coach - will be transformative for our program. Coach Walsh’s passion for developing players will impact our student-athletes for a lifetime.”

While a senior quarterback at Cretin, Walsh passed for over 2,000 yards and 25 touchdowns, receiving USA Today’s Prep Academic All-American and the Minneapolis-St. Paul Metro Football Player of the Year honors. He also played baseball and basketball for the Raiders.

Walsh played collegiately at the University of Miami, leading the Hurricanes to an NCAA title as a sophomore in 1987. The following season, he was named an All-American and finished fourth in the Heisman Trophy balloting. In two seasons as Miami’s starter, Walsh compiled a 23-1 record.

Walsh was selected in the first round of the NFL’s 1989 supplemental draft by the Dallas Cowboys, with whom he began his 11-year pro career. He also played in the NFL with the New Orleans Saints, Chicago Bears, St. Louis Rams, Tampa Bay Buccaneers, and Indianapolis Colts.

In his NFL career, Walsh started 38 games throwing for 40 touchdown passes and led the New Orleans Saints and the Chicago Bears to the playoffs as their starting quarterback.

He was the Head Coach for Cardinal Newman High School in Florida, with five state playoff appearances in six seasons. He was also Director of the Football division at IMG Academy in Florida, which included management of the high school football teams, youth camps, and professional and collegiate training. While focusing on academic and sports development, IMG’s high school football team finished in the Top 5 nationally each season under his leadership. During the past five years coaching quarterback in the CFL, Walsh was part of the Grey Cup Championship with the Toronto Argonauts in 2017.

Walsh’s primary position at CDH will be as a Major Gifts Officer in the Advancement Office starting this summer. Second only to his football prowess, Walsh brings a significant amount of experience in philanthropy. At Cardinal Newman, he was Director of the Annual Fund and major gifts.

Miesbauer Stays On at CDH

Chuck Miesbauer '03, former head CDH football coach for the past three seasons, will remain at CDH. “We are very grateful that our student-athletes had a chance to grow under Miesbauer’s leadership these last three seasons,” commented Frank Miley, President. “Off the field, his work with our alumni and fund-raising is critical work, and he will continue to work with CDH going forward.”

Miesbauer is credited with growing the local football network by collaborating with the St. Paul Football and the Capital City Football Association through a new 7 on 7 Flag Football League.

“Chuck’s vision to recoup and grow the number of younger football players in our area is a significant contribution to the future success of football at the high school level,” said Archer. “Plus, he brought back some of the fine traditions that made CDH football so special.”

John Erdos '54 shares his reasons for giving to CDH via his IRA.

Remember CDH in your End-of-Year Giving

Our generous donors ensure that families do not have to pay the full cost for a CDH education - keeping our tuition cost among the lowest in the metro.

Teri and Kevin McCloughan are chairs of the Strong Foundation. Vibrant Future Campaign.